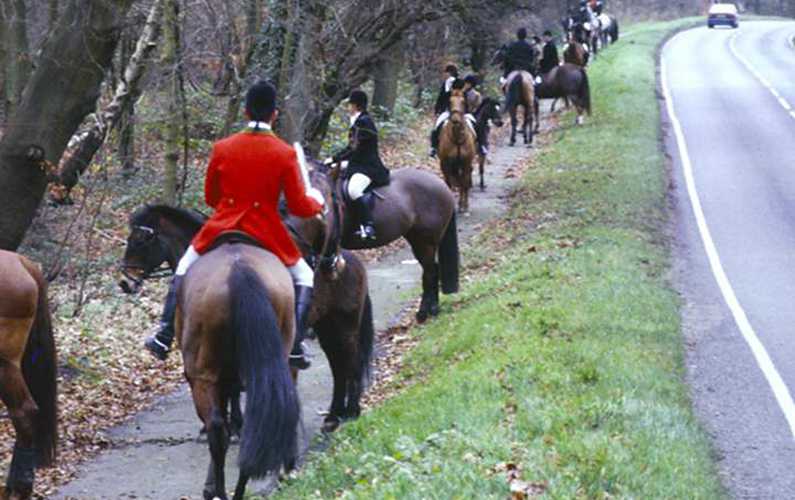 There are a number of clearly defined roles in a traditional fox hunt. Hunts have said that they wish to maintain their infrastructure so these roles can apply to hunts claiming to trail hunt or those engaging in other forms of hunting.

The huntsman is a hunt servant who hunts the hounds and is responsible for controlling and directing the pack during the day’s hunting. He/she decides which coverts will be drawn, although the general plan for the day’s hunting would have been discussed in advance with the master(s). In traditional live quarry hunting the huntsman would also decide which quarry would be hunted if more than one was found and which quarry would not be pursued, for example if the quarry was close to a busy road or heading for land where access had not been granted. Significantly the huntsman is the only one to use the horn, which is used to encourage the hounds or otherwise control and direct them. The horn is also used to communicate to the whipper-in and hunt followers. The pack is also controlled by a variety of voice calls and the use of whips, both by the huntsman and whipper-in. The huntsman is also responsible for the welfare of the hounds and cleanliness of the kennels. The huntsman is normally professional and is paid. Sometimes the master (or one of the masters) will hunt the hounds in which case someone else, known as the kennel huntsman, will be responsible for the kennels. He/she will often be the whipper-in.

The huntsman is assisted by one or two whippers-in, who are also hunt servants. Their job is to assist the huntsman during the day’s hunting, particularly in keeping the pack together and resolving any problems that occur during the day. His/her primary role is to keep the pack together and round up missing hounds. Even when hounds are hunting the whipper-in could be some distance away collecting up stray hounds. When the pack needs to be stopped or called off, the whipper-in will be with the huntsman helping him/her to stop the hounds. In traditional live quarry hunting the whipper-in would also be required to act as point rider so that he/she could alert the huntsman if the quarry was spotted.

The kennelman works in the kennels under the kennel huntsman and looks after the hounds in kennels, assuring that all tasks are completed when the pack and hunt servants return from hunting.

A hunt has one or more masters who are responsible for the overall management and conduct of the hunt, in particular they are responsible for liaising with local farmers and landowners. The hunt servants act on their orders. The huntsman will meet with one or more of the masters prior to a day’s hunting to agree how the day would be conducted. However, not all the masters will necessarily attend every meet, but at least one would act as the field master on the hunting day. The field master is in charge of the field (those people who follow on horseback); his/her prime function was to stop the field over-running the hounds, hindering the hounds while they work, prevent the field going to areas where access has been refused and minimising damage to crops and fences. The masters may belong to one of the masters’ associations but this is not statutory, but if they are members they are bound by the association’s rules and can be disciplined. The masters are directly responsible to the hunt committee.

The hunt committee is elected by the subscribers (paid up members of the hunt) which in turn appoints the hunt master(s). The committee is responsible for the overall policy of the hunt and for raising funds to run the hunt which includes wages for hunt servants, food for the hounds, maintenance of the hunt premises and equipment, payment for damage to non hunt property etc. Funds come from a number of sources such as subscriptions, cap, point to point races, merchandise etc.

The hunt secretary is responsible for calling and minuting committee meetings, liaising with the masters, collecting subscriptions and dealing with all the financial issues relating to the hunt, including the payment of the wages. Thus he/she is the key person in the management and day-to-day running of the hunt.

The collective term for the mounted hunt followers. Members of the field may occasionally act as a point rider.

The field master is in charge of the field and will guide and manage the field during the day’s hunting. His/her prime function is to stop the field from over-running the hounds, prevent the field from hindering the hounds while they work and from going into areas where access has been refused and to minimise damage to crops, fences and hedges. The field master will always be introduced at the meet so the riders know who will be in charge of them during the day. The role of field master may be undertaken by different people on different days but will normally be one of the masters.

Followers of the hunt that are not mounted. They will follow the hunt on foot, by car, bicycle or on a quad bike.

In traditional fox hunting the hunt would employ one or more terriermen. Their role was to stop or block fox earths and badger setts in the area where the hunting was to take place to prevent foxes from going to ground and they were also responsible for dealing with hunted foxes that had gone to ground.These foxes would be located using terriers and then dug out and shot or alternatively the fox would be bolted to be hunted again by hounds. Terrier men would have at least one terrier with then as well as equipment such as spades, nets and terrier locating devices. They normally followed the hunt on quad bikes but also in 4x4s or on foot depending on the terrain. Hunts now refer to terriermen as ‘countrymen’ and say they are employed to open and close gates, repair fences and lay trails. Terriermen were also used during mink hunts and would use terriers to locate and bolt the mink that went to ground in holes in river banks.

A hunt master of the Vale of White Horse Hunt and two landowners have been charged with Hunting Act offences....

The killing of the quarry by the hounds without a chase.